When popular Rwandan singer Albert Nabonibo came out as gay, he lost everything overnight: the love of his fans, friends and family.

He then found sanctuary in an unexpected source: the embrace of a Kigali church.

Although homosexuality is not banned in the East African country, many LGBTQ Rwandans experience discrimination at every turn: fired from jobs, disowned by relatives, denied medical treatment and even beaten up by bigots.

When Nabonibo told a journalist in an interview in 2019 that he was gay, the backlash was swift and scary.

“I used to be invited to sing at Christian concerts and to sing at church. Many people loved my music. But when I came out as gay, all that changed,” the 38-year-old told AFP.

A well-known figure among churchgoers in Kigali because of his gospel background, he saw work opportunities quickly dry up and his Pentecostal church told him he was unwelcome unless he “repented”, he said. 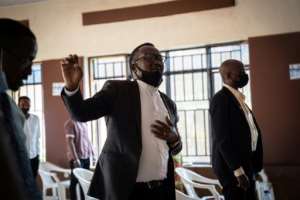 The personal setbacks were even worse.

“I lost all my friends. They cannot associate themselves with someone who is gay. Most of my family members no longer talk to me,” he said.

The gospel musician finally found a home at the EDAR church, whose senior pastor Jean de Dieu Uwiragiye told him he was free to worship there. EDAR’s name in French means the Church of God in Africa in Rwanda.

“I was surprised because this was different from how I had been treated by fellow Christians — family and friends,” Nabonibo said.

During a recent Sunday service — the first since the Covid-19 pandemic forced EDAR to shut its doors — the church was heaving with music as an energetic choir urged congregants to rise to their feet. 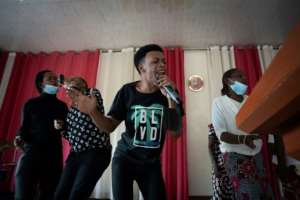 During a recent Sunday service, the church was heaving with music as an energetic choir urged congregants to rise to their feet. By Simon WOHLFAHRT (AFP)

“This church offered me something that no one else ever did: acceptance and understanding,” transgender choir member Cadette told AFP.

“I love to sing. But other churches are too judgmental and cannot offer a person like me an opportunity to serve God… here, I find that opportunity and other people who feel like me,” the 23-year-old said.

It marks a sea-change from the situation four years ago, when Uwiragiye became head of the Kigali church.

The 45-year-old had long been an ally of Rwanda’s LGBTQ community.

As he rose through the ranks of the clergy, he realised that his new position at EDAR offered him a rare opportunity.

“I got the conviction to break the conservative views held by (the) church and try to introduce LGBT members… because I knew that many of them were suffering and churches were shunning them,” he told AFP.

It was a risky move.

Within weeks, many congregants walked out of the church, calling the decision an abomination. 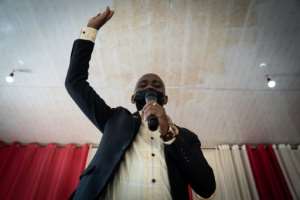 Pastors at other churches said Uwiragiye was possessed by demons.

Even strangers jumped into the fray, shouting homophobic slurs at the soft-spoken preacher in public.

Today, the church boasts two gay pastors and a 200-strong congregation, the majority of whom identify as heterosexual.

“I have been abused and shunned by fellow Rwandan pastors because they fear what I represent but this is my calling,” Seleman Nizeyimana, one of the two pastors, told AFP.

“They have twisted the Bible to make it sound like God hates us. But why would God… hate his own creation?”

Although Rwanda is among a handful of African countries that are signatories to a 2011 United Nations joint statement condemning violence against LGBTQ people, the community continues to battle abuse and stigma. 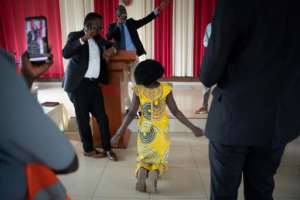 Pastor Uwiragiye has organised anti-discrimination training for other church officials as well as doctors and nurses. By Simon WOHLFAHRT (AFP)

Victims rarely approach the police because they fear being vilified further and believe their “complaints are unlikely to be acted upon”, HDI director Aflodis Kagaba told AFP.

“(People) need time to adjust from their beliefs, and I am slowly seeing them becoming more accepting.”

The pastor has since organised anti-discrimination training for other church officials as well as doctors and nurses. Meanwhile HDI and a coalition of NGOs are lobbying the government to introduce laws to protect LGBTQ people from arbitrary arrest and detention.

“There is not a single church that allows gays to marry in Rwanda but we can hope that in the future things change,” the musician said.

“It is all about progress.”

Foreigner Blak - November 24, 2021 0
President Nana Addo Dankwa Akufo-Addo has donated a sum of one million Ghana cedis to Premier League club ahead of their CAF...

President Nana Addo Dankwa Akufo-Addo has donated a sum of one million Ghana cedis to Premier League club ahead of their CAF...
Read more

Celtic were beaten 4-0 in their home match against Bayer Leverkusen in SeptemberLeicester City boss Brendan Rodgers will put aside speculation linking...
Read more

President Nana Addo Dankwa Akufo-Addo has donated a sum of one million Ghana cedis to Premier League club ahead of their CAF...
Read more

Celtic were beaten 4-0 in their home match against Bayer Leverkusen in SeptemberLeicester City boss Brendan Rodgers will put aside speculation linking...
Read more